Read in Your Language

Bhutan
The land of delightful surprises!

Unfold the magic and mysteries of Bhutan, officially known as the Kingdom of Bhutan, which is a fascinating country of rolling hills, pristine natural beauty, towering Himalayas, dense forests, cascading waterfalls, ancient temples and monasteries and rich cultural heritage. It is a land of surprises where the rice is red and chillies aren’t just a seasoning but the main ingredient. This beautiful kingdom is a remarkable amalgamation of ancient and modern.

Located in South Asia, the country is majorly mountainous and Thimphu is its capital. The sight of the prayer flags fluttering along the high ridges is a common sight here as Buddhism is intricately woven into the culture of Bhutan and plays an important role in the people’s life. It is a great country where Gross National Happiness is considered more important than Gross National Product. By the country laws, at least 60 percent of the county must remain forested for all future generations. They have high reverence for Mother Nature which is commendable.

Why is Bhutan quite expensive? However, it is worth it…

It is a Buddhist monastery and fortress which also serves as the office of the Kingh, ministers and different government organizations. It also serves as the venue for the famous Thimphu (religious) Festival every year. It is the biggest cultural event of the country.

This monastery located on a rocky mountain is also known as the Tiger’s Nest. Built in the 8th century, it is believed to be the site where the 2nd Buddha, Guru Rimpoche meditated. It is one of the most important Buddhist pilgrimage sites in the Himalayas.

Trekking and hiking are the adventurous ways to see the charm of Bhutan. The treks give you an opportunity to discovery natural beauty of the country and to acquaint with the culture and lifestyle of the people. On the treks you will pass through gorgeous vegetation to river valleys and icy slopes of the Himalayas. You can also enjoy mountain biking here.

Spices are vital ingredients in the cuisine of Bhutan. The Bhutan people love eating chillies. Rice is an important part of the meals apart from the side dishes like meat or vegetables. The rice is red in colour and is very nutritious. Ema Dasti, a mix of chillies and tasty local cheese, is the national dish of the country. Momos, Phaksha Paa (pork cooked with red chillies), Jasha Maru (spicy minced chicken) are the other popular dishes.

The rich cultural heritage of Bhutan is one of its main attractions. It is amazing to see that the people of Bhutan, as well as the government, show great dedication in preserving and promoting their cultural values. You go to any place in Bhutan and you will find the essence of the culture everywhere. Buddhism is the predominant religion here.

Bhutan is ideally located in the southern slopes of the Eastern Himalayas which have been recognized as a global biodiversity hotspot. WWF counts it among the 234 globally outstanding eco-regions of the world. The country is home to more than 5,400 plant species and 770 bird species. Some of the best wildlife destinations of Bhutan are Sakteng Wildlife Sanctuary, Bumdeling Wildlife Sanctuary, Phibsoo Wildlife Sanctuary, Royal Manas National Park and many more. 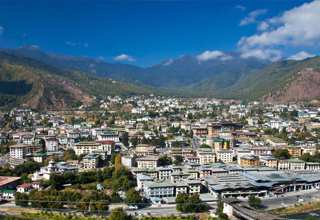 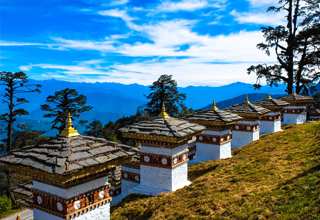 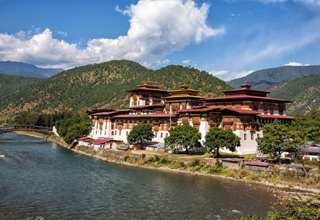 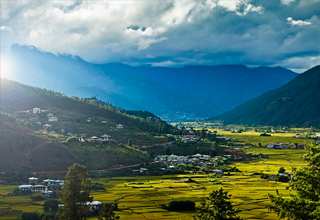 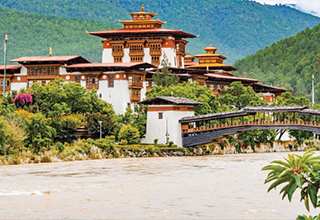 Thimpu is the capital city of Bhutan and is the only capital in the world without traffic lights. It’s a clean and lively place with attractions like stupas, dzong, National Library, Institute for Zorig Chusum(arts and crafts school), the Folk Heritage Museum, National Textile Museum, Buddha Point etc. There is so much to explore and experience in this city.

A visit to this Pass will bring to face to face with breathtaking views of the majestic Himalayas and fluttering prayer flags. It is located on the way to Punakha from Thimphu.  The Pass is dotted with 108 chortens which were built in honour of the Bhutanese soldiers. It is very popular with tourists.

Also known as The Palace of Great Bliss, Punakha Dzong is a must-visit destination. It was built in 1637 and faced damange six times. Today it stands as one of the most arresting dzongs in the country. Its wonderful assembly hall is open to tourists. As you move to the far end of the Dzong you will find a Kuenrey, a temple housing huge statue of the Buddha. The ceiling of the temple is decorated with amazingly painted dragons. The Kuenrey has the most mesmerizing painting of the twelve episodes of the life of the Buddha.

Paro valley extends from the confluence of the Paro Chhu and the Wang Chhu rivers at Chuzom up to Mt. Jomolhari at the Tibetan border to the North. This picturesque region is one of the widest valleys in the kingdom and is covered in fertile rice fields and has a beautiful, crystalline river meandering down the valley.

Accentuating the natural beauty are the elegant, traditional-style houses that dot the valley and surrounding hills. One of the distinctive features of Paro town is that it is situated in a flat valley bottom and follows a grid-like pattern. The central plaza is adorned with a large prayer wheel and a small amphitheater where events are held throughout the year.

“The former capital of Bhutan, a quaint little town with much to offer.  Average elevation of 1,200 meters above sea level’”

It’s located in the Bhutanese State and formerly named Pungtang Dechen Photrang Dzong that translates to “the palace of bliss or great happiness,” Punakha Dzong was built in 1637. The founder of Bhutanese State, Zhabdrung Ngawayang Namgyel himself chose the location and built this emblem of the Bhutanese religious architecture.

It has been inextricably linked with momentous occasions in Bhutanese history. It served as the capital of the country from 1637 to 1907 and the first national assembly was hosted here in 1953. Punakha Dzong is not only the second oldest and second largest dzong but it also has one of the most majestic structures in the country.

Although you can visit Bhutan at any time of the year but the most favourable time to travel to Bhutan is from October to December. The weather is pleasant, skies are clear and the air is fresh. It becomes a little cold in January and February. In April, the valley teems up with colourful flowers making it look like heaven. Monsoon season which spans from June to September is not so ideal to visit Bhutan.

Five  interesting things that you must do in Bhutan

Some important Do’s and Don’ts while in Bhutan 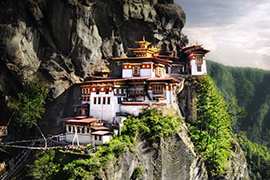 Best of Bhutan "The Kingdom of Happiness 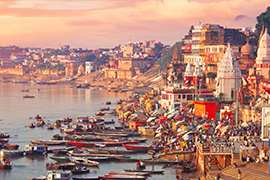 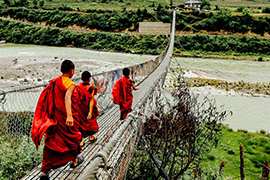 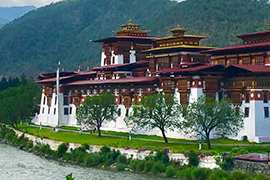 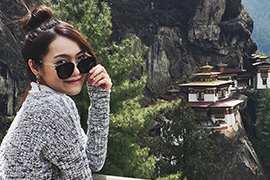 Mesmerizing Bhutan "The Land of Buddhism"

The arrangement of our trip was so perfectly done, that i could not find even a single fault or drawback for which i could provide a suggestion. We are so much impressed and touched by the hospitality and services provided. To be frank, we have already started to plan for our next holiday, may be sometime in the end of the year. We will get back to you soon :-) Thanks again Exceptional Escapes.....you guys are truly EXCEPTIONAL!!!! - read more...

The trip in general has been exceptional
The driver was a sweetheart. Always bringing me something to eat or drink and also always carrying a beautiful smile - read more...

Generally all are good except that in shimla. Silverine hotel is not a suitable hotel for elderly people as they need to walk up and downhill to the hotel….though the place is ideal for shoppers - read more...

Thank you so very much for going above and beyond to ensure that we had a wonderful trip. I have been telling everyone about your hospitality. I truly had a great time and I especially am thankful for all your organizing and to take time to show us your family and invite us to your home. You have a beautiful family and I think Choti (your little sister) is so adorable - read more...

Peggy Gluckstein - Canada
Thank you for an amazing trip!!

Hi Gaurav, thanks for following up and for all your efforts in making all the necessary arrangements for my trip. I thoroughly enjoyed the trip. A few suggestions on how you might improve your services for future bookings - read more...

Many thanks for putting together a wonderful and memorable vacation for us. We thoroughly enjoyed it. We did not find anything lacking from your side. It was our first visit to India and it seems like we are already planning to be back. The pace was hectic so we did not find much time to visit the local markets which we will have to make up next time - read more...

We reached home safely on Sunday morning (USA time) and slept most of the day. I cannot thank you enough for all your help and efforts in making our trip such a wonderful success. I will never forget the experiences we had and fun time we enjoyed all throughout the trip. I will send you pictures soon.....'not to worry!!!' - read more...

We waited almost two years to meet again and it was well worth it. Everybody had a fantastic time and loved every moment of it. Your friend speaks very good English now and we all wish her well in the future. It seems that shopping with your friend was the highlight of the trip, the ladies would not stop talking about it - read more...

Singh, Roy - USA
We had the best time in India!

Send us an enquiry

Please do write us about your DREAM HOLIDAY. One of our destination expert will be in touch with you to plan an exceptional holiday for you...